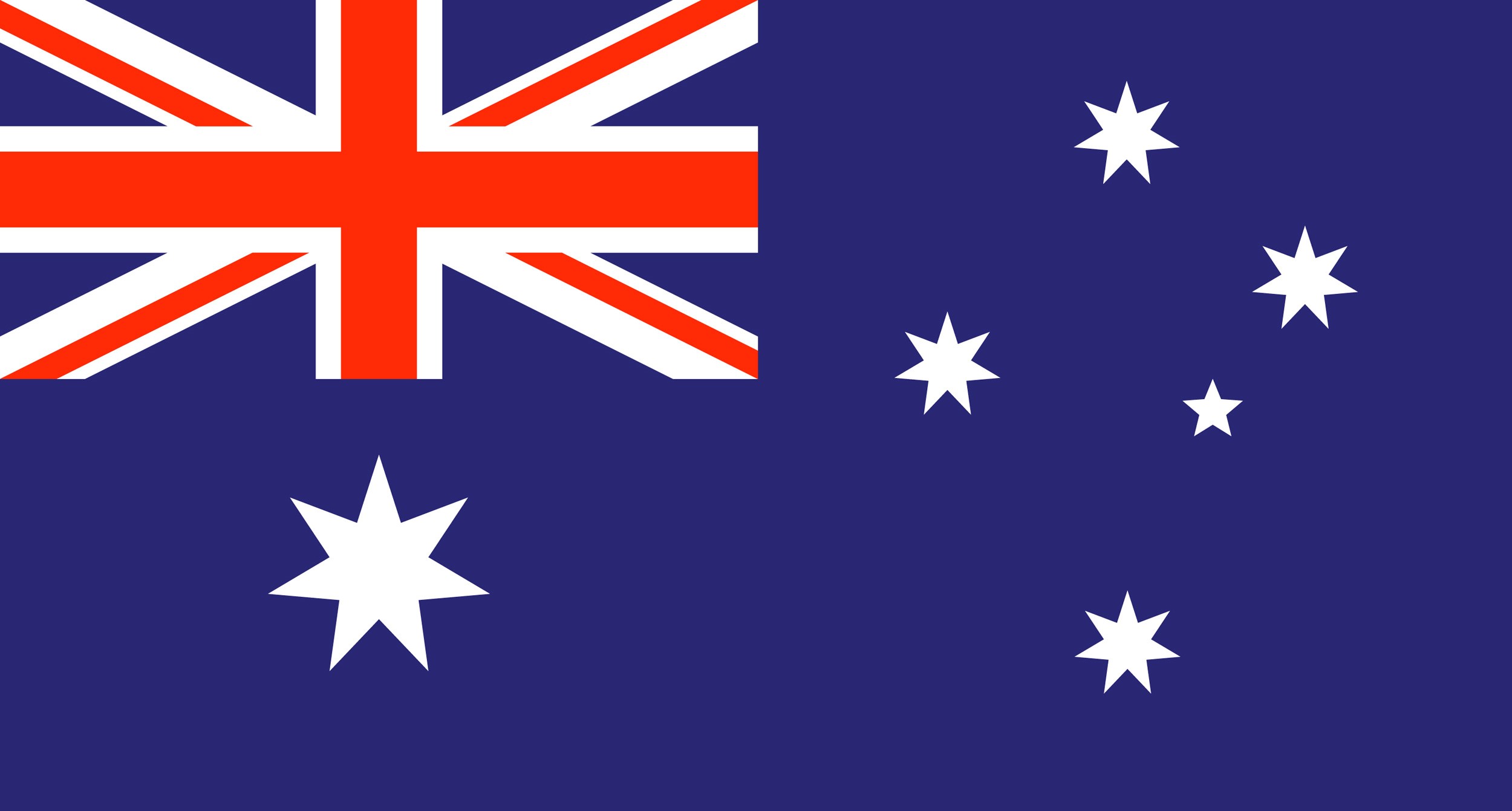 Australia is poised to become the world's leading producer of liquefied natural gas (LNG). The country has more LNG projects planned with more than A$175 billion ($181.6 billion) worth of LNG plants under construction in Australia. The country looks set to overtake Qatar to become the world's biggest LNG exporter by 2018. A combination of conventional offshore, floating LNG (FLNG) and coal-bed methane (CBM) to LNG projects will take the number of producing LNG trains from seven to 21. Australia's nameplate LNG capacity will more than triple from about 24 million tonnes per year (t/y) now to more than 80 million (t/y). 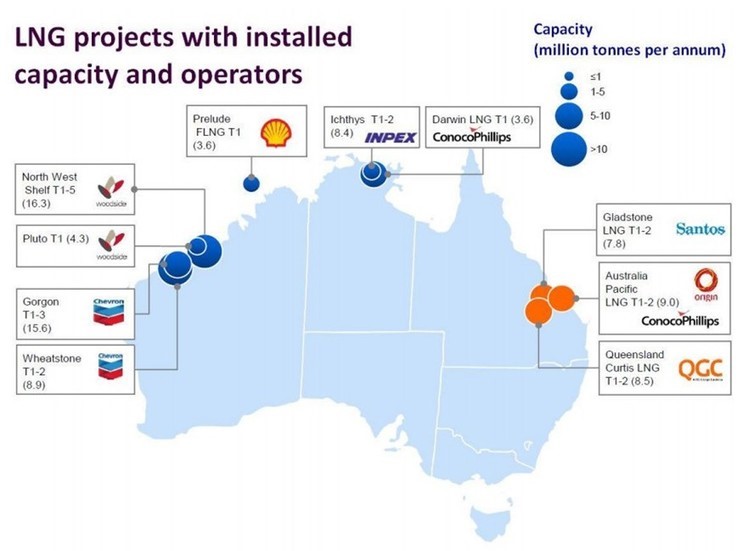 But the looming glut of liquefied natural gas (LNG) from projects in the US, as well as emerging export hubs in Canada, East and West Africa, has cast new doubt on the viability of supply expansion in Australia. Still, the nation is on track to overtake Qatar as the world's biggest exporter and looks well positioned to dominate the market into the next decade.

Although there is no shortage of potential competition from new international projects, the cost and schedule estimates for these new hubs remain too optimistic, leaving the door open for further Australia expansion. In fact, although it is sometimes forgotten, Australia will be in a unique position at the end of the decade: it will have nine onshore LNG export plants, each with expansion potentials, spread geographically across the continent. 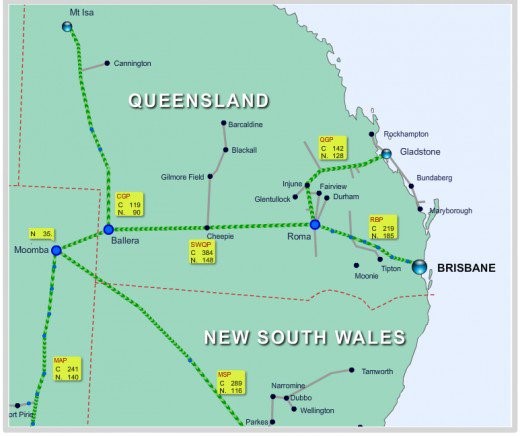 However, this expansion has economic implications. As an economy, Australia is considerably oil short, consuming 346 million barrels of crude per year and products in 2013-15, but pumping only 140 million barrels of oil and liquids. Even with oil-linked LNG exports, Australia still ran a petroleum trade deficits of A$14.1 billion in 2013. But as LNG exports balloon, this deficit will likely flip into a surplus and will probably push the national current account deficit into the black for the first time since 1975.

Exports will more than treble to over 80 million tonnes a year (t/y) by 2018, and Australia will overtake Qatar as the world's largest exporter of LNG. But this wave of LNG projects has triggered a surge in development costs-hitting a record A$60 billion ($56 billion) in 2014 which has stalled new schemes. That's the total spending on oil and gas development as of a start of 2010 to the end of 2013. The problem for Australia is trying to wind back these inflationary pressures. 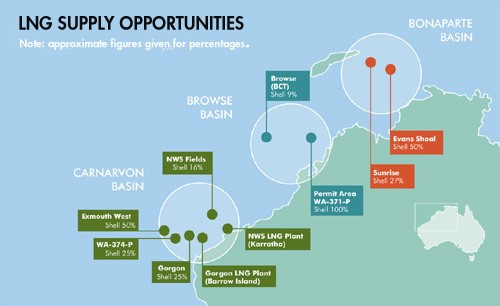 The country's share of liquefied natural gas supply to Asia is continuing to grow as new export facilities in Western Australia, Queensland and the Northern Territory are completed and start raising production capacity. But with a saturated Asian buyers' market and low oil prices hurting profitability, ramp-up timelines are slipping at some projects and the outlook for expansion or new projects is bleak.

Australia is now the world's second-largest LNG exporter after Qatar and will become the world's leading exporter by 2020. According to the country's Office of the Chief Economist (OCE), another 15m tonnes a year of export capacity is expected to be completed by mid-2017, including second and third trains at Gorgon and a second train at Australia Pacific LNG. This will bring total LNG export capacity to 66m t/y.

"The downward revision to the forecast for export earnings in 2016-17 reflects a more conservative view of the ramp up of LNG exports at several projects, as well as the lagged effect of lower than expected oil prices," the OCE says.

At present, Australia has 54.5m t/y of LNG export capacity with a further 26.4m t/y to be added by end-2018, bringing its total commissioned capacity to more than 80m t/y, assuming all is completed on schedule and all facilities ramp up fully.

Teething problems have beset a number of Australia's new LNG projects, exposing the difficulties associated with bringing large-scale facilities on stream while costs remain so high.

At the newly-minted Gorgon facility in Western Australia, developer Chevron halted operations for two months after its first shipment in March 2016 over problems with its cooling systems. The size, scale and remoteness of the project have been a drag on progress-and profitability-since the start.

Having brought on stream one of the world's costliest LNG export projects, Chevron is now said to be facing calls from customers to renegotiate the price and terms of some of its sales and purchasing agreements. Undeterred, the US firm is building Gorgon's second and third production trains.

In the Northern Territory, Japanese developer Inpex announced in late 2015 that initial output from its $34bn Ichthys project-underwritten by Australia's largest-ever project-financing deals worth $20bn-would be delayed from end-2016 to the third quarter of 2017 following problems at its fabrication yards in Asia.

In Queensland, where three projects converting coal-bed methane (CBM) to LNG are now in operation, weak oil prices have taken the heaviest toll. The high exploration costs needed to sustain production at these facilities is proving more difficult than expected and significantly affecting profitability as well as the speed of the ramp up at two of Queensland's three projects.

The Origin Energy-led project Gladstone LNG (GLNG) is reportedly well behind its drilling target of 17 wells per month and the Santos-led APLNG project is said to be buying third-party gas in-stead of spending on exploratory drilling. Queensland's third LNG project, Shell's Queensland Curtis LNG is faring better, drilling 21 development wells in July 2016, slightly below the target of 25 wells per month.

APLNG's second train started production on 10 October, 2016 though Santos recently indicated that it may operate both trains at GLNG below capacity for some time and weak gas prices were restricting capital expenditure while the cost of third-party gas had risen. Energy consultants EnergyQuest note that Santos may take two to three years to ramp up GLNG to full capacity and progress with the second train depends on production at the onshore Roma gasfield.

So Australia could fall below LNG-output expectations if demand in Asia keeps floundering and prices remain low. The OCE forecasts that the nominal unit value of Australia's LNG exports for fiscal year 2016-17 will match those of a year earlier at $6.70 per million British thermal units, down from $11.30/m Btu for fiscal year 2014-15. Asian spot LNG prices are currently around $6.10/m Btu after hitting a low of $4/m Btu last April, a significant drop on their peak of $20.50/m Btu in February 2014.

Wood Mackenzie, an energy consultancy, believes Australia has an opportunity to supply new volumes at lower cost by making the most of its LNG-export infrastructure base through debottlenecking, backfill and potential brown-field expansions. Australia could deliver up to 22m t/y of new LNG capacity by 2030, and keep it competitive with the lowest-cost, unsanctioned projects elsewhere. Such is the potential, new Australian volumes could even displace up to 20% of alternate global supply growth by 2030, Wood Mackenzie believes.

But the great unknown continues to be the role that cheap US LNG through the expanded Panama Canal will have on the Asian gas market and the profitability and output of Australian LNG projects in the short term. The long term looks rosier than next year.

Australian wholesale and domestic energy consumers face a 50% rise in gas prices due to the country's focus on liquid natural gas (LNG), a National Australia Bank report has said.

Growth has, however, been slower than planned, and global LNG prices have fallen since 2014. The volume of exports is also expected to rise, overtaking coal as Australia's largest export after iron ore in 2018. This exposure to LNG export markets is likely to increase wholesale prices significantly, with "far reaching implications for domestic gas use", NAB said.

"Higher wholesale gas prices are likely to spill over into electricity markets by increasing fuel costs for peak load open cycle gas turbines. Higher gas prices are already flowing through to domestic customers, with reports that contracts are being offered well in excess of current netback export parity prices. While wholesale gas prices generally constitute a smaller portion of residential customers’ bills, higher prices are likely to see some fuel substitution to electricity, especially for space heating," the report said.

Although residential gas prices have increased across Australia over the past 15 years following a period of relative stability in the 1990s, they "remained underpinned by low wholesale prices struck through stable long term contracts", NAB said.

However, gas suppliers are now believed to be offering long term wholesale contracts at AU$10 per gigajoule (GJ) in expectation of a recovery in LNG export prices in the coming years, the report said.

If spot and domestic contract prices move consistently into that price range, alongside increases in other costs, the price of gas for residential customers in Australia’s five largest cities could increase by more than 50% by 2020, it said.

"The impact of higher prices will differ across different parts of the country … Melbourne tends to use around twice as much gas as Sydney, reflecting historic factors and climate. Industrial demand continues to face challenges from a wind-down in manufacturing, but the more than doubling of wholesale gas prices will increase input costs for gas intensive producers," the NAB report said.

The International Energy Agency (IEA) said in November 2016 that major transformations in the global energy system will mean that renewables and natural gas are the "big winners" in meeting energy demand by 2040.

Investment in oil and gas will remain essential to meet demand and replace declining production, but growth in renewables and energy efficiency will reduce demand for oil and gas imports in many countries. Increased LNG shipments will also change how gas security is perceived, the IEA said.